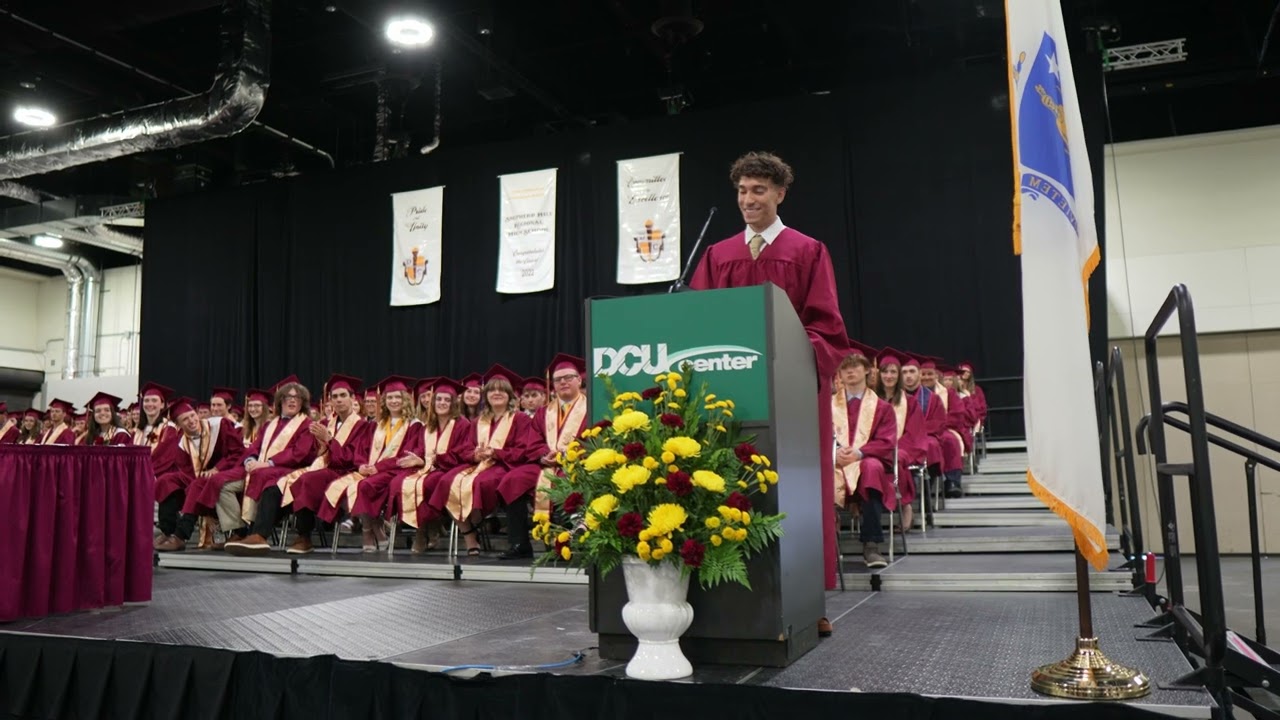 CHARLTON — In the days and weeks leading up to his graduation speech, Shepherd Hill Regional Hill School valedictorian Trevor Wallace grappled with how he could make his moment on stage memorable for those watching.

He would open his notes app and jot down ideas in short bursts, trying to make sure he didn't end up saying something "lame."

Wallace eventually came to the conclusion that he would talk about his Asperger's syndrome, or his "superpower," as he would describe it in his speech, which has garnered over 27,000 views since it was posted on YouTube.

"I wanted to talk about my Asperger's because the vast majority of people at my school had no idea," Wallace said.

He compiled his fragmented ideas into a single document and went to the priest of his church and a family friend who runs a public speaking program to get pointers and help with his final draft.

At first, Wallace wasn't sure if he was going to go through with describing his Asperger's as a superpower because "maybe that's kind of cringe," but after receiving encouragement, he pushed forward.

Despite being seated directly behind him on stage, Wallace said that he was unable to hear his classmates' reaction about his big reveal.

"Some of my friends were telling me that they saw kids turn around and be like, 'Oh, my God. What?' when I dropped the hammer," Wallace said. "I wanted people to kind of get that shock factor that kind of really makes you stop and think for a second."

He said he wanted people to reflect and look within themselves to discover their superpower while also recognizing that everybody around them is different.

'Every person has a superpower'

He said that he also wants people to understand — and what he tried to convey with his speech — is that different neurological and developmental disorders present themselves in different ways for every person.

Seeking to understand how people see the world can "change the way the world sees other people," he said.

Wallace said that he found the idea of discussing his Asperger's syndrome in his speech and revealing this part of himself to his classmates was somewhat scary.

"I started to have some doubts. I was like, 'Oh, do I really want to say that? It's something very personal I'm about to share with a lot of people that didn't know that,' " he said. "Once I said it, it kind of flowed off the tongue … I was just very happy with the immense positive reaction that I got from so many people."

Born in Salem, Wallace and his family moved to Auburn after his brother Gavin, who is two years younger than he, was born.

From kindergarten through seventh grade, Wallace attended Auburn schools while also participating in a number of therapies, including behavioral, music and speech therapy, which made him feel "alienated" when getting pulled away from his classmates, he said in his speech.

Because he was so young and "socially disconnected," he did not process he was in therapy as a child and does not have many memories of his time in therapy, he said.

"There was one where I would go play Legos and I remember all the Lego guys didn't have heads because kids would eat them," Wallace said. "There was a speech class that I would go to that was part of school … We had a deck of cards that were all idioms and we would run through all the idioms and then I would go home and tell my mom all the idioms."

Figuring things out for himself

He said that he was very thankful for all of the therapy he was able to attend and that it was good for his development but that he eventually got to a point where he had to "figure things out for myself."

After seventh grade, Wallace and his family moved to Charlton, where, for his first couple of years, he spent most of his time alone, he said.

It was a significant developmental period for him because it taught him the value of hard work and that "you can really do anything" if you commit.

His devotion to the marimba and talent paid off when one of his band directors encouraged him to check out the Jersey Surf drum corps In New Jersey.

"I went to all the camps, I tried out, I ended up getting a slot on the marimba, which was pretty wild for a sophomore in high school," Wallace said.

Just as his excitement about getting into the drum corps was building, COVID-19 halted his plans.

"That was kind of the moment where I was like, 'Well, I got into the Jersey surf, I did all this stuff, I played all the music, but now it almost seemed futile,' " he said.

He said he began to feel as though he wasted his time trying to get into the group only to end up not being able to participate.

However, the last years of school, after the COVID-19 pandemic started, proved to be a transformational period of social growth for Wallace, as he started to realize he may have grown out of that phase of his life.

"That's when I started to branch out socially," he said. "I forced myself to start running track, I started forcing myself to hang out with kids on the track team to kind of branch out my social groups."

Once he started expanding his social groups, he said, he would do more "normal" things that high school students do, rather than sit in his room and "watch videos about math" or play marimba for three hours every day.

He also met a close friend during this time who introduced him to the Greek Orthodox church where his father was the pastor.

The church has become a second home for Wallace, who said that he immediately connected with the church and churchgoers who were "just so welcoming" when he first became involved.

"I was just sitting in the Orthodox church for the first time on Easter last year, and I was looking around at all of the pictures, the icons and the chandeliers and all of the pretty lights and the candles," Wallace said. "I was like, 'Wow, this is just very special.' "

Since then, he has not only grown close with the community and the friend's family, but he has grown particularly close with Father Luke, who has "been a good mentor for me."

He said that he also likes that most of the liturgies are sung, since he and his family love music.

While his feelings toward band may have changed in school, music continues to be an interest and hobby since it has always been a part of his life, he said.

"Music has always been something that's been very important to me in my life and just the fact that there's so much music in that church is very special to me," he said.

It is a hobby he said he will continue when he arrives at Tufts University this August, where he'll be studying physics.

"I was hoping they might have a percussion ensemble but it didn't really seem like they did," Wallace said. "They do have an African drumming ensemble that looks really interesting, so I'm probably going to do something more creative and more open-minded like that."

He said that he also plans to get involved in as many research opportunities as he can while at Tufts since he has an interest in biophysics and genetics.

"When you learn about making proteins in class, you learn the RNA goes to the ribosomes, and then there's magically a protein," Wallace said. "I'm interested in more of the finer mechanics and how those things line up."

It is something that he would like to research, especially after his teacher was unable to answer how it happens, and also being unable to find an answer online.

"I like hands-on science work, where I can really figure out things. I like understanding why things work," he said.

He said that, since Tufts encourages students to branch out of what they are studying and also requires six semesters of a foreign language, he is going to also take classes on ancient Greek since he wants to be able understand what is going on at his church.

Wallace, who is scheduled to move into his dorm in late August, said that he will spend the summer working part time, spending time with friends and traveling to Tijuana, Mexico, in July with his church to help build a home.

Since giving his speech, he, as well as his other family members, have received messages from people saying that they connected with his speech or were touched by his words.